I missed my Metrolink train today 9/19/2014 so I drove into North Hollywood to take the Red Line Metro subway into 7th Street.

After passing through the turnstile and going down the escalator, I was greeted by LA County Sheriff’s deputies checking passes.

Doesn’t seem like a good use of Sheriff’s deputies. I wonder how they feel about it.

I just read an article in the LA Times about Metro and LA Sheriff Deputies. Seems that  some deputies think of patrolling the metro to be punishment. I feel for them.

Today at 7th Street Station, I encountered LA Sheriff’s deputies with M4 rifles. I did take a photo of the rifle he held.  What are they preparing for ? 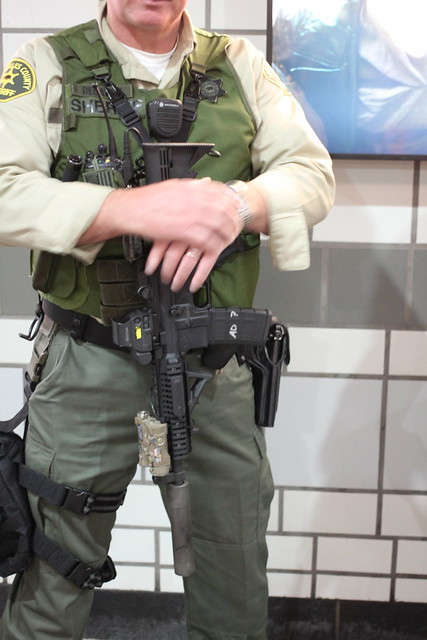 have worked in Financial Services for over 15 years with extensive experience in Project Management, Systems Analysis, Compliance, Operations, Relationship Management, and System Management. I am an NRA Rifle and Pistol Instructor as well as an NRA Range Safety Officer. I am a high power rocketeer. I'm an Level 2 Certified in NAR and Tripoli I am also an Amateur Extra Radio Operator. I enjoy photography: https://www.flickr.com/photos/gracefamily/ View all posts by ai6pg